Baking was never really something I thought I’d be interested in. All the tedious measuring, waiting and cleaning you have to do for a simple loaf of bread you can easily buy freshly baked at Wholefoods. Why go though all the trouble? The answer to that question would be – Why not, given all the time I have during shelter in place. I felt like I had to try or learn something new before life goes back to normal. It was my only chance!

I remember eating at a 3 Michelin star restaurant in Oakland a few years back and the only unforgettable thing I had was the sourdough bread. The crust tasted like dark roasted coffee with caramel and butter while the inside warm, soft and airy to the bite. Will I ever be able to replicate that same experience? Maybe? Possible? It’s worth the shot. I start with this beginner’s recipe that was highly recommended by a few seasoned baker friends of mine.

I’m pretty stoked about being able to fire my own greenware now. This little Skutt 8×6 Firebox can fire up to Cone 6. I wish I had more space for a larger kiln!

I’ve recently been obsessed with drinking Green Tea matcha from Mizuba Tea Company and was inspired to make my own Chawans. My favorite chawan was the Sunset Horizon Chawan that was unfortunately sold out. Luckily, I was able to recreate it myself while expanding the concept to using other colors like green and blue. I also like the black and white glaze over speckled buff exposing just a little of the clay to simulate mountain ridges.

We took our first stab at making a stand for one of my ceramic pots. This is what we came up with.

I discovered a new hobby… ceramics! I took a beginner’s class at Merritt Ceramics back in March and it was love at first throw.  Since then I haven’t stopped practicing. I attended a “throwing off the hump” workshop, a second beginner’s class, am currently in the intermediate class, and in July I’ll be taking a 5-day course on how to throw big at The Crucible in Oakland. I’m also now a proud owner of the Shimpo VL-Lite potter’s wheel.

There’s still a ton of things to learn about ceramics and I’m excited to soak in as much knowledge as I can so that I can throw more consistently. Just look at the photo on this post and you’ll notice the different sizes. Just FYI, the intention was to make them all identical in height and diameter. I definitely need more practice. 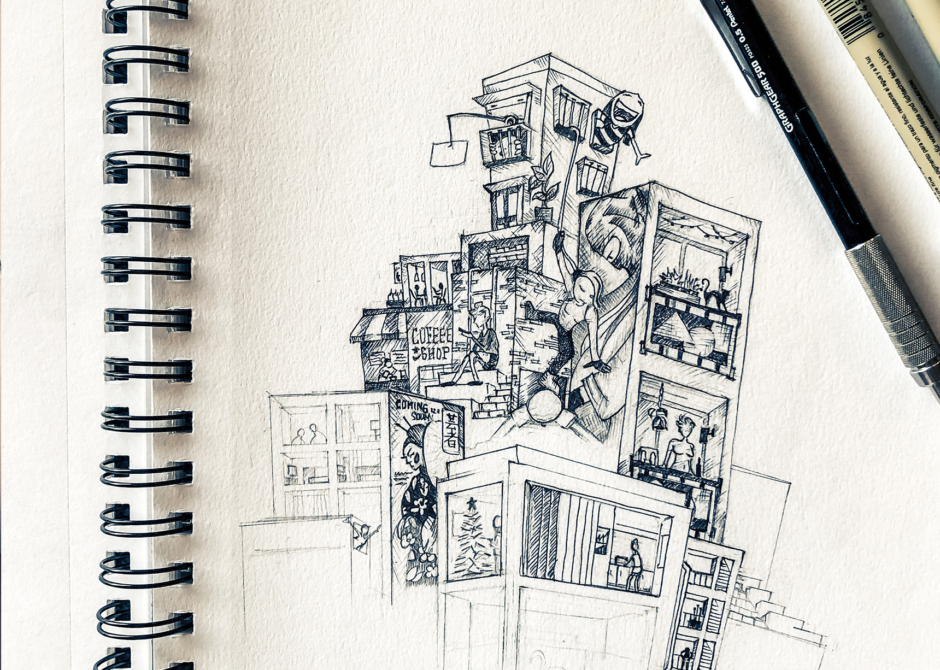 My neighborhood with me in it.

I’ve always loved the view from my living room. It’s not as pretty as the lake but I still get to watch people walk by. That house across is my neighbor Sam’s house, and that dog bombing my composition… that’s Diego.

Having Some Fun with Watercolors

I’ve been following Noelle Pharen on IG and am so inspired to paint!

Sometimes I forget how much I enjoy doodling.

Look at these beauties!

Here’s a quick 1 minute video for Peter’s Kettle Corn. I used both GoPro5 and Lumix G7 for this series.

The Hario V60 Pour Over Tutorial

Today was going to be a good day for creativity. I love the ritual of making coffee every morning and thought I’d share my process using my Lumix G7. I think I’m starting to get the hang of editing videos on Adobe Premiere. I’m sure I’m not using all the features but I’m happy with how this video came out. I used a Nikon 17-55mm 2.8 and a Nikon 50mm 1.4 lens to shoot.

Humboldt 2017 from Timmy Perez on Vimeo.

In the morning as I was packing my Karma grip,  I realized that I had forgotten to charge it the night before. I figure I would have time since we weren’t leaving until another couple hours.  An hour into charging, I noticed that the battery status didn’t really move that much. Out of the 4 dotted lights, only one was blinking, indicating that it hasn’t even reached 25%.  I went online and discovered that it would take 6 hours to fully charge the Karma grip. What???? 6 hours for 1.5 hours of use? Lame. You would need one of these chargers to cut charging time to 2 hours. Ofcourse you’d have to shell out $50 for it.

Luckily the drive to Humboldt was going to be roughly 4 hours, and since I had a head start at home, it would be fully juiced up (via Khai’s car charger) by the time we reach our destination. I couldn’t possibly pass on the opportunity to capture this 4th of July’s camping trip!

The first 3 minutes was mostly shot in Hidden Springs Campground where we camped the first 2 nights. The last night was spent in Albee Creek, one of the best sites I’ve been to so far.

Pride2017 from Timmy Perez on Vimeo.

My very first video using the GoPro5 and the GoPro Karma Grip. I love how crisp the resolution on this camera is.